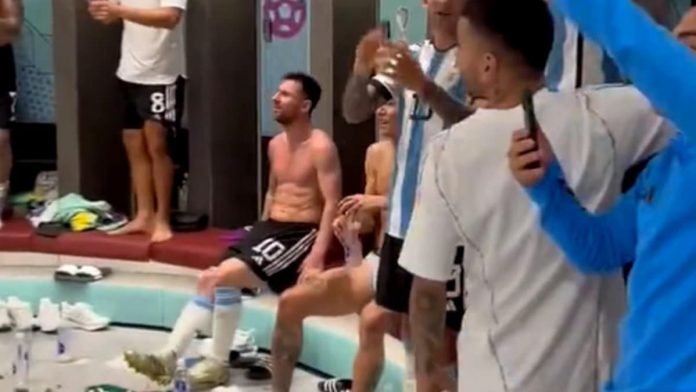 Lionel Messi during Argentina’s celebration after victory over Mexico.© Twitter

World boxing champion Saul ‘Canelo’ Alvarez issued an apology to Lionel Messi on Wednesday after accusing the Argentine World Cup star of mistreating a Mexican football jersey. Alvarez took to Twitter last weekend to vent anger at Messi, saying the football star had “insulted” Mexico by appearing to place his foot on an El Tri jersey on the floor of the Argentina locker room.

“Did you see Messi cleaning the changing room with our jersey and flag????” Mexican icon Alvarez wrote on Twitter. “He had better ask God that I don’t find him!! Just as I respect Argentina, you have to respect Mexico!! I’m not talking about the country (Argentina) I’m talking about Messi.”

Vieron a Messi cleaning the floor with our player and flag????

Alvarez’s outburst elicited immediate responses from those defending Messi and claiming there was nothing unusual about a football jersey being on the floor after a match. Argentina captain Messi had apparently swapped shirts with his Mexico counterpart Andres Guardado.

On Wednesday, Alvarez, 32, apologized to Messi and Argentina, saying he had over-reacted. “I was carried away by the passion and love I feel for my country and I made comments that were out of place for which I want to apologize to Messi and the people of Argentina,” Alvarez wrote on Twitter.

“Every day we learn something new and this time it was my turn.

“I wish both teams much success in their matches today and will continue supporting Mexico until the end.”

Argentina have qualified for the Round of 16 stage at the FIFA World Cup after defeating Poland on Wednesday, while Mexico were eliminated despite a win over Saudi Arabia.