Home Sport "We Are Dreaming Of Winning The Title": Neymar After Brazil Enter Quarter-finals...
Sport

“We Are Dreaming Of Winning The Title”: Neymar After Brazil Enter Quarter-finals | football news 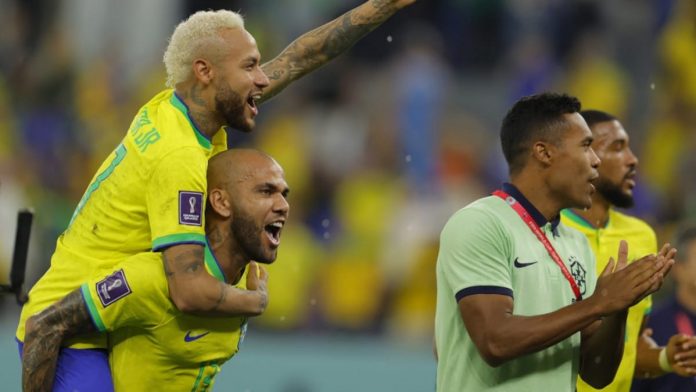 Brazil hit top gear with Neymar back in the line-up to brush aside South Korea 4-1 on Monday and ease into the quarter-finals of the World Cup where they will face Croatia. Neymar had been sidelined for two matches with a sprained ankle but with the world’s most expensive player restored to their side, Brazil’s yellow shirts poured forward at Stadium 974. Vinicius Junior opened the scoring inside seven minutes before Neymar added another from the penalty spot to move to 76 goals for his country, leaving him just one away from equaling Pele’s all-time record tally.

The ailing Pele watched from his hospital bed in Sao Paulo where the 82-year-old was admitted last Tuesday amid ongoing treatment for colon cancer.

He will have enjoyed Richarlison’s dazzling goal to make it 3-0 before Lucas Paqueta added another before half-time, all celebrated with dance routines as Brazil’s supporters roared their approval.

Paik Seung-ho pulled a goal back for the Koreans when the Brazilians took their foot off the pedal, but their thoughts had already turned to Friday’s quarter-final clash with 2018 runners-up Croatia.

It was the first time that Brazil had scored four goals in a World Cup knockout game since 1998 and the performance rapped out a warning to their rivals that they have a sixth title in their sights.

“We are dreaming of winning the title, that’s obvious, but we have to go step by step,” Neymar said.

He admitted he had feared at one point that he would not play again in the tournament after injuring his ankle in Brazil’s opening game against Serbia.

“When I got injured I spent a very difficult night. I was thinking of a million different things.”

Goalkeeper Dominik Livakovic was the hero for Croatia in the day’s other last-16 tie, saving three penalties in the shootout as his side beat Japan to reach the last eight.

Japan had already beaten European heavyweights Germany and Spain in Qatar and they looked on track to take down 2018 runners-up Croatia when Daizen Maeda put them ahead just before half-time.

But Ivan Perisic brought Croatia level in the 55th minute with an impressive header from Dejan Lovren’s cross and a hard-fought match became the first of this World Cup to go into extra time.

When neither side could break the deadlock, the tie also produced the first penalty shootout of Qatar 2022.

It continued a remarkable pattern — seven of Croatia’s past eight knockout games at major tournaments have gone to extra time, the only exception being their defeat in the final by France in Russia four years ago.

Livakovic, the hero of the hour, said: “I don’t think they were difficult penalties to save, they weren’t perfect penalties, and thank God for that.”

Croatia captain Luka Modric said: “It seems that we can’t do it without a drama.

“We are more than happy to reach the quarter-finals. It was a very difficult game against a very tough team.”

Japan forward Ritsu Doan gave a frank assessment of his country’s performance: “No matter how well we fought today, we didn’t change history.”

Three-quarters of the quarter-final line-up is now set, with Argentina facing the Netherlands on Friday, the same day Brazil play Croatia.

England face the daunting prospect of taking on holders France on Saturday.

Spain will be looking to book their place in the last eight when they face a dangerous Morocco side on Tuesday, while Cristiano Ronaldo’s Spain play Switzerland.