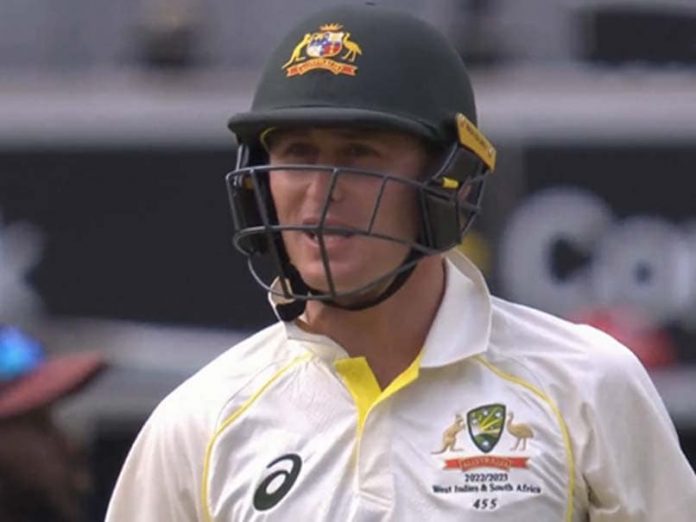 Right-handed batsman Marnus Labuschagne was at his best on the opening day of the first Test against West Indies and he registered his 8th Test ton. His unbeaten knock of 154 helped Australia end Day 1 at 293/2, with the hosts being in the driver’s seat in Perth. Labuschagne is known for his jittery stance while batting and he often comes up with hilarious comments, which leaves commentators in splits.

One such incident happened on the first delivery of the final over of the day bowled by West Indies all-rounder Jason Holder. The ball swung back late and nipped away from the deck. This forced Labuschagne to play at it, and the ball was mighty close to the outside edge.

As the ball beat his outside edge, Marnus ended up saying: “Oh Jason, that’s a delicious ball.” This comment left the commentators in splits.

Labuschagne cracked a masterful unbeaten 154 while Usman Khawaja and Steve Smith hit 50s as a dominant Australia took control of the opening Test against the West Indies at Perth Stadium on Wednesday.

The hosts reached an ominous 293-2 at stumps on day one following captain Pat Cummins’ decision to bat in hot and dry conditions. The total was built off the back of a 142-run stand between Labuschagne and Khawaja, who came together after David Warner was out for five, then an unbeaten 142 with Smith.

A focused Labuschagne, who survived chances on 75 and 137, brought up his eighth century in his 29th Test and with the in-form Smith unbeaten on 59 the omens are not good for the visitors, who have failed to win a Test in Australia for 25 years.