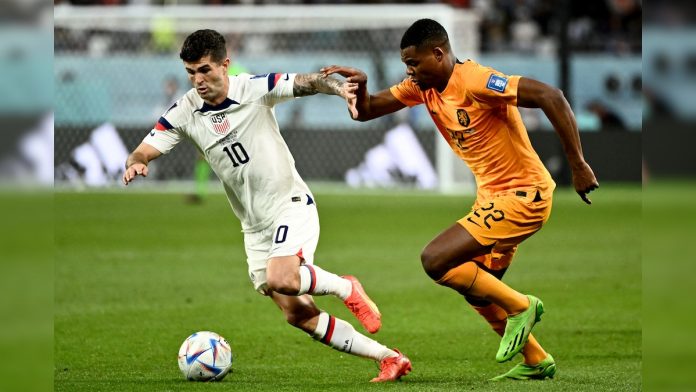 Netherlands defeated USA 3-1 in Round of 16 match© AFP

The battle between ‘football’ and ‘soccer’ concluded in the FIFA World Cup 2022 on Saturday as Netherlands defeated USA 3-1 in the Round of 16 clash to book a spot in the quarter-finals. While fans on social media termed the result a victory for ‘football’ over ‘soccer’, the top political leaders of the Netherlands and USA also got involved into the debate. The subject prompted Twitter wisecracks between United States of America President Joe Biden and Netherlands Prime Minister Mark Rutte.

“It’s called soccer,” Biden said in a video posted on Twitter wishing the US team luck ahead of their last-16 clash against the Dutch side Saturday at the Khalifa International Stadium in Doha.

But the clinical Netherlands soon ended the United States’ World Cup dream, sweeping into the quarter-finals with a ruthless 3-1 victory — and Rutte was quick to respond to Biden’s tweet.

“Strictly speaking, shouldn’t it be ‘voetbal’?” he replied, using the Dutch word for football. Kidding aside: congrats to your team and country, Mark. Rematch in New Zealand,” the US president added.

Strictly speaking, shouldn’t it be “voetbal”?

Kidding aside: congrats to your team and country, Mark. Rematch in New Zealand. https://t.co/pqL3CaRIPS

The 2019 World Cup-winning US women’s team could come up against the Netherlands at the tournament in New Zealand next year.

While USA are out of the FIFA World Cup 2022, Netherlands next take on the mighty Argentina in the quarter-final of the tournament.

FIFA World Cup 2022: This Is How Japan Fans Celebrated Win Over Spain