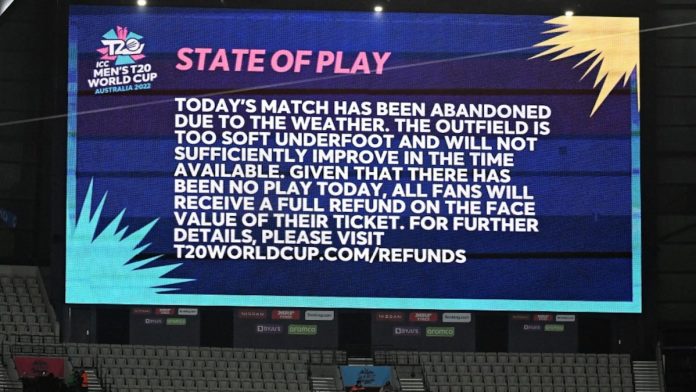 T20 World Cup: Four matches have been washed out so far, all in Group 1.© AFP

A much-awaited match between England and Australia at the T20 World Cup was washed out without a ball being bowled at the Melbourne Cricket Ground (MCG) on Friday. It was the second match of the day, after Ireland v Afghanistan, to be washed out at the venue, leaving the group wide open. The match between England and Australia was must-win for both the teams, having lost a game each. As things stand, New Zealand currently lead the group, ahead of their game against Sri Lanka in Sydney on Saturday.

England, Ireland and defending champions Australia have also won three points, but the Kiwis have a better net run-rate and also have a game in hand.

Sri Lanka and Afghanistan have two points from as many outings. The Asian champions, Sri Lanka, however, could go top of the table if they upset the Blackcaps at the Sydney Cricket Ground.

The top two teams from the group will reach the semi-finals.

So far, four matches have been washed out in the tournament due to rain, all in Group 1.

Afghanistan have now had two of their three games abandoned, and as a result, lie bottom of the table.

“The preparation was really good, we learned a lot from our first game against England and worked on our particular mistakes,” he said.

“We were fully ready… the plan was to put a score on the board and bring the spinners into the game during the chase.”