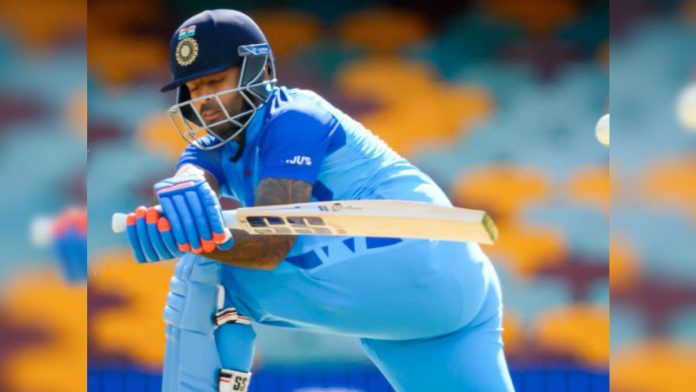 One of the finest batters in modern-day cricket at present, Suryakumar Yadav looked in full swing as India took on Australia in the warm-up match ahead of the start of the T20 World Cup 2022. Surya scored a 33-ball fifty in the match before he got out. But now, a video has surfaced on social media where the attacking batter could be heard telling the non-striker Ravichandran Ashwin that he wasn’t feeling like hitting the ball anymore. On the very next delivery, Surya departed.

Courtesy of Suryakumar and KL Rahul’s half-centuries, India put a total of 186 runs on the board. While Rahul scored 57 runs from 33 balls before being dismissed, Surya consumed the same number of balls for his 50.

Having scored his half-century, Surya fas to face ball no. 33 of his innings when he told his partner Ashwin, “maarne ka mood nahi ho raha”. On the next delivery, Kane Richardson got him out caught & bowled. Here’s the video of the incident:

Fortunately for India, Surya’s knock was enough to take India’s score to 186 runs in 20 overs. Chasing the target, Australia were bowled out for 180 runs.

Speaking of the team’s batting, skipper Rohit Sharma did assert that there was scope for the team to score 10-15 runs more.

“I thought we batted well, towards the end we could have added 10-15 runs more. We always want a set batter to stay till the end, SKY did it, overall a great batting effort with nice bounce, was a pitch where you can trust your shots. You got to be smart with batting on grounds like these. You can’t forget to push the balls into the gaps, scoring 8-9 runs in an over can be quite an effective plan. game for us,” he said.

With the man not being a competitive one, the batters might have taken a slightly lighter approach towards the end. But, with the Super 12 round scheduled to start on October 23 for India, the players would be expected to give nothing but their 100%.