Home International Sunak is a devotee of Krishna, took part in the chariot journeys,...
International

Sunak is a devotee of Krishna, took part in the chariot journeys, used to go with grandfather to this temple of Southampton 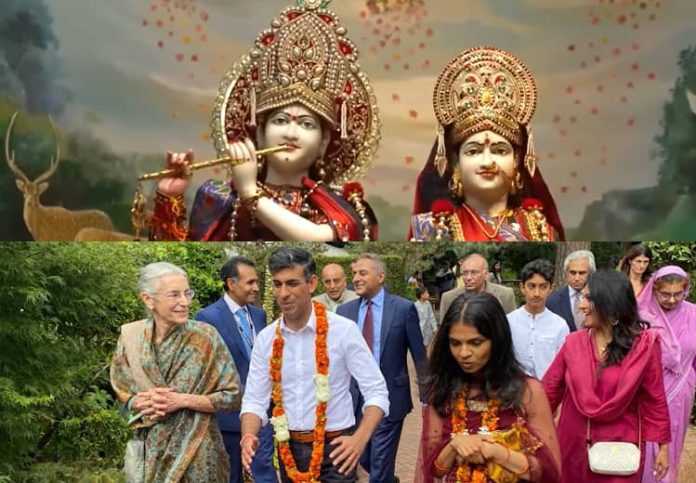 Rishi Sunak as Krishna Bhakta: British MP of Indian origin Rishi Sunak has become the new Prime Minister of Britain. He was appointed Prime Minister by the British King Charles III on Tuesday (25 October). When Rishi Sunak’s name first came in the race for British PM, there was a lot of discussion about him.

This is the first time in the history of Britain that a person of black and Indian origin has reached the pinnacle of power. US President Joe Biden has described it as a wonderful and unprecedented milestone. Britain’s youngest person has become prime minister for the first time in more than two centuries. Sunak’s age is 42 years. In 2020, he became the Finance Minister of Britain. There is a lot of discussion on all these points with Sunak’s achievement, but there is one more aspect, which is emerging very much in the discussion, that of his being a Hindu and a devotee of Krishna.

Sunak takes work in difficult times from the teachings of Gita

There are many such videos on social media, in which Rishi Sunak is shown as a devotee of Krishna. Sunak is seen performing religious rituals and worshiping the cow. According to reports, when Rishi Sunak became an MP for the second time in 2017, he swore for the first time by placing his hand on Shrimad Bhagwat Gita. After that he continued with it. Once when he was questioned about this, he said that he is a completely British citizen but is also a Hindu and holds the religious and cultural heritage of India.

On the occasion of Janmashtami this year, Rishi Sunak and his wife Akshata offered prayers at the Hare Krishna Temple in Hertfordshire, South England. On this occasion, Sunak had said that the teachings of Gita give him the strength to keep fighting in the most difficult times. Sunak said, “It is very special for me to be here on the eve of Janmashtami. It has been a tough campaign for the past few weeks and I am giving whatever I have. In the toughest of times, what Akshata has done for me is teaching me the Gita. The teachings of the Gita give me the strength to keep growing and fighting for what I believe in.” After this Sunak worshiped the cow in the temple’s cowshed. Its video became very viral.

Once Sunak was seen rolling rotis in the kitchen of the temple. He was rolling a round rotis. According to a BBC report, Sanjay Chandarana, president of the Vedic Society Hindu Temple in Southampton, asked him if he cooked food at home as well. Sunak replied, “Yes, I like to cook.”

Sunak used to go to temple with grandparents

According to the report, Naresh Chatwala, a visitor to the Vedic Hindu Temple in Southampton, said, “Rishi Sunak used to come to the temple since he was a very young child, with his parents, along with his grand parents.” Refreshing his memories, the man Avinash Patel says, “We took out a Rath Yatra at the time of installation of the idol. I made Rishi sit on the truck with my kids, it’s one of those memories that never fades.

Sunak worked as a waiter in a hotel during his studies.

Rishi’s father’s name is Yashveer Sunak and mother’s name is Usha Sunak. Father is a doctor by profession and mother has been running a drugstore for a time. Sunak’s parents live in Southampton. Sunak also used to work as a waiter during his studies in a restaurant named Kutis Brasserie in the same city. There was no hesitation for studies in his house. That’s why Sunak’s studies went well. Sunak once said of the family’s success in Britain, “My mother ran a local chemist’s shop on Burger Steat in Southampton and my father was a local NHS GP, this country gave her the chance to live a better life.” And he took advantage of it.”

In 2009, Sunak married Akshata, daughter of Infosys founder Narayana Murthy, in Bangalore. This couple has two children. Rishi’s wife Akshata is also a devotee of Krishna. Sunak does not forget to take his name in religious events. According to Sunak, Akshata often keeps messaging him about Geeta on mobile. On many occasions, he does not hesitate to call himself a proud Hindu.

Also read- Rishi Sunak: Became MP for the first time in 2015 and PM of Britain within 7 years, know how Rishi Sunak’s political career was