Home Entertainment Rupali Ganguly and Shehnaaz Gill take to the dance floor at a...
Entertainment

Rupali Ganguly and Shehnaaz Gill take to the dance floor at a wedding. watch 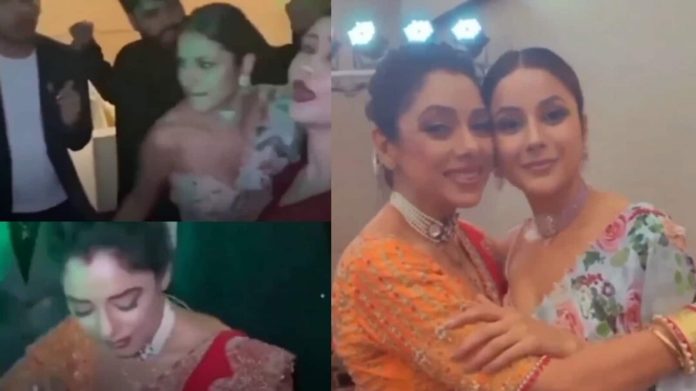 Rupali Ganguly and Shehnaaz Gill met at Kaushal Joshi and Heena Lad’s wedding and later took to the dance floor in a group. The television actors had a grand time as they were filmed grooving to the music. Kaushal is the manager of Shahnaz. Several stars from the television industry including Bharti Singh and Hina Khan attended the wedding festivities. (Also Read: Shehnaaz Gill playing with Bharti Singh’s son is the cutest thing you will see today. watch,

A recent video shared online of both the actors shows them meeting and warmly greeting each other. Both the women wore saris at the wedding. Shehnaaz wore a light floral print saree, while Rupali wore a red and white lehenga with an orange blouse. They pulled their hair back in a bun and both Shehnaaz and Rupali wore choker necklaces to accentuate their outfits.

Once they hit the dance floor, in front of a DJ, the actors relaxed and enjoyed themselves among the other wedding guests. A fan commented, “Two strong personalities.” Yet another shared, “Diva (fire emoji)” Most of the comments came for Shehnaaz as fans praised her looks and personality. An Instagram user said, “You are so beautiful inside! My princess #ShehnaazGil pure soul with a golden heart. (two hearts emoji).”

Shehnaaz, who appeared in Bigg Boss 13 in 2019, started off by appearing in music videos. He made his acting debut in 2017 with the Punjabi film Sat Sri Akal Eng. Last year, she also starred in the blockbuster Punjabi film Honsla Rakh alongside Diljit Dosanjh and Sonam Bajwa. She will next be seen in Salman Khan starrer Kisi Ka Bhai Kisi Ki Jaan in 2023.

Rupali, who plays the title character in the popular daily soap, Anupama, is the daughter of filmmaker Anil Ganguly and appeared as a child in his film Saheb (1985), starring Anil Kapoor. Her brother is award winning choreographer Vijay Ganguly. She also worked in the television shows Sanjeevani, Sarabhai Vs Sarabhai, Baa Bahu Aur Baby and Kahaani Ghar Ghar Kii. Rupali returned to acting after seven years with Anupama, in which she plays a Gujarati housewife in the larger Shah family.