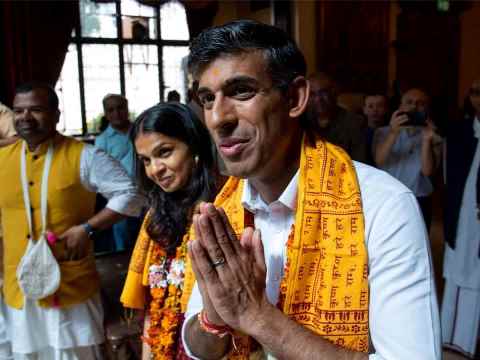 Newly-elected Prime Minister Rishi Sunak called for the resignation of several members of Liz Truss’s team of ministers on Tuesday within an hour of his meeting with King Charles II, a precursor to the announcement of his new cabinet. According to this information received from sources, Dominic Raab, who was previously Deputy Prime Minister of Boris Johnson’s government, has been appointed as Deputy Prime Minister and Secretary of Justice, Downing Street.

If a person of Indian origin reaches the top of power in the country that Britain ruled India for nearly 200 years, then it is a matter of pride for the whole country. Rishi Sunak has done this feat here. He is the first Indian PM to Britain. Apart from this, Sunak has become the youngest PM in the history of 210 years of England.

I will unite our country, not with words, but with action.

I will work day in and day out to deliver for you.

The photo of Rishi Sunak giving a speech wearing a Kalava is becoming very viral. During his first speech from 10 Downing Street in Britain, Sunak was wearing red kalawa or Molly thread. Kalava has a special belief in Hinduism. Especially on auspicious occasions. Obviously Sunak was born and educated in western civilization, but he is very aware of his religion. He also took oath for the first time by placing his hands on the Gita. On many such occasions Sunak has said that he is a British citizen but he is a Hindu by religion. He had also expressed pride in being a Hindu on many occasions. Apart from this, Sunak is a person who believes in religion. When Sunak became the Finance Minister of Britain in 2020, he took oath by placing his hands on the Bhagavad Gita. He also lit diyas on the occasion of Diwali.

Before Rishi Sunak, Liz Trace became the Prime Minister of England. But in just 45 days he submitted his resignation. After this, once again the race for PM started in Britain. In which apart from Sunak, the name of former PM Boris Johnson was also coming out, but after Johnson’s withdrawal, it was decided to become the PM of Sunak.