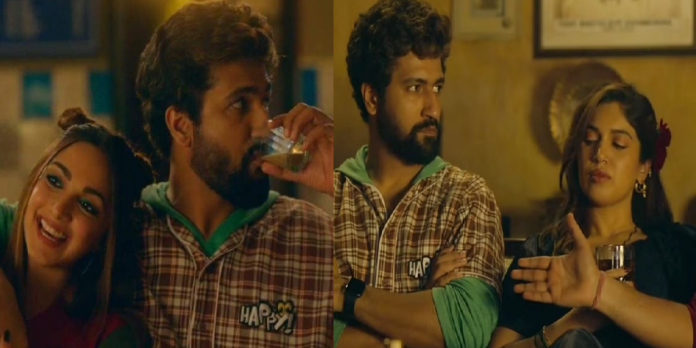 The secret of Vicky Kaushal’s happy married life is revealed, an unknown thing about Katrina is also known

the story
Govinda Waghmare (Vicky Kaushal) is a struggling choreographer, married to Gauri (Bhumi Pednekar), who harasses and leaves no chance to humiliate him, and on the other hand has girlfriend Suku (Kiara Advani), a dancer by profession. Loves a lot. But she is in trouble and life takes a roller coaster ride when Gauri is found dead and becomes the prime suspect.

Review
Shot in Mumbai, the film quickly establishes the backstory of Govinda (whose name is misspelled as Govinda e Waghmare on his birth certificate) and how his mother Asha (Renuka Shahane) and he inherited the ‘Asha Niwas’ and now owns Rs 120 crore. Owners of bungalows of Rs. They are embroiled in a dispute over the same property with Asha’s husband’s first wife Charulata (Veenaam Nair) and their son Vishnu (Akshay Gunawat). Not only this, Govinda, who is struggling to build a career, is also at loggerheads with his wife Gauri, who wants a divorce and wants 2 crores in return, while girlfriend Suku wants to marry him. Suddenly one day Gauri is found dead and Govinda is accused of murder. The film is full of fun, drama, suspense and murder mystery.

‘I am still alive…’ Actress Veena Kapoor came forward, her son was accused of murder

Writer-director Shashank Kheta delivers a mix of comedy and mystery entertainment in this 90s thriller. There are unexpected twists and turns in the film. While new characters (such as the six-pack Sandy and his father) are introduced in the film, they bring with them plenty of drama. The first part is full of laugh-out-loud moments that even falter at times and one-on-one jokes. However, the second part is fun.

Vicky Kaushal is seen in such a character for the first time and is reminiscent of the 90s hero. He has played the character of Govinda well and the comic timing is also superb. His performance on songs like Bang Bang, Kajra Re and Radha Teri Chunri is amazing. Bhumi also plays Gauri perfectly but the scenes with Govinda could have been better. Kiara fits the character of Suku perfectly. So Govinda’s paralyzed and wheelchair-bound mother is Dramabaaz.

Song Kya Baat Hai 2.0 and Bijli from the movie ‘Govinda Mera Naam’ will make you dance. Everything from Vicky and Kiar’s ‘Pappy Jappy’ track to the matching clothes will bring back memories of the 90s comedy.

Movie Review Faraaz: What Is Islam Really? Hansal Mehta’s ‘Faraz’ is a film that discusses this issue.