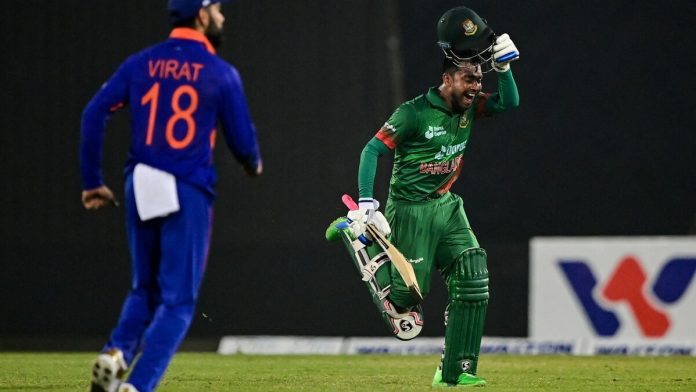 Bangladesh’s last wicket pair of Mehidy Hasan Miraj and Mustafizur Rahaman pulled off an absolute heist with a thrilling 51-run stand as India choked during final half an hour to lose a low-scoring opening ODI by one wicket in Mirpur on Sunday. While India produced yet another poor batting show which saw them get all-out for 186 in 41.2 overs, the bowlers did a splendid job to reduce Bangladesh to 136 for 9 in the 40th over.

However KL Rahul, who was entrusted with keeping duties to fit him and another veteran Shikhar Dhawan in the same XI, dropped an aerial sitter when Bangladesh still needed 32 runs.

Washington Sundar also didn’t go for an easy catch at third man earning the wrath of skipper Rohit Sharma as Miraj (38 not out off 39 balls) along with Mustafizur (10 not out) got the team past the finishing line in exactly 46 overs. .

On a track that assisted both seamers and spinners, Indian top-order barring KL Rahul (73 off 70 balls) flopped badly to be bowled out for a score below 200.

But the total that looked eminently achievable at the break turned into a sizeable one due to lion-hearted efforts from Mohammed Siraj (3/32), Shardul Thakur (1/21) and Washington Sundar (2/17).

Debutant Kuldeep Sen’s (2/37) pace was used to hit him for three sixes — two of them during the slog overs while Deepak Chahar (1/32) despite providing a first-ball breakthrough looked pedestrian towards the end when there was no To install nip in the air.

In the end, Miraj ensured that the hosts didn’t suffer a setback in a game which should have been won with their bowling effort alone.

Earlier, Rahul struck 73 off 70 balls on a day when the others struggled to get going and when the side was packed with all-rounders. Rahul hit five fours and four sixes.

Opting to field, Mustafizur Rahman started the proceedings with a maiden, before India skipper Rohit Sharma opened the visitors’ boundary count by smashing Hasan Mahmud through the gap between point and cover.

Shikhar Dhawan went down the ground and got his first boundary by sending the ball over cover.

Bangladesh skipper Litton Das effected an early bowling change, bringing in off-spinner Mehidy Hasan Miraz into the attack in the fourth over, and he started on a tidy note before castling Dhawan for seven.

The opener went for the reverse sweep but the ball bounced a bit more than usual, touched his wrist before going on to hit the stumps.

Rohit struck the first six of the series when he pulled Mahmud over deep square leg after the medium pacer drifted the ball on his pads.

The India skipper again found the deep square leg region but this time for a boundary as he employed the sweep shot against Miraz.

Rohit then chose the off-side, cutting Mahmud along the ground for a boundary after being given plenty of width.

It was then the turn of Virat Kohli to pick the deep square leg region as the former skipper swept Miraz for a four.

Litton made another bowling change, summoning the seasoned Shakib, and again he was instantly rewarded thanks to a brilliant delivery by the star all-rounder.

Having got a start, Rohit (27 off 31 balls) went for the turn but the ball didn’t, and instead, went past the inside edge before disturbing the middle and leg stumps.

There was more joy in store for the hosts as, two balls later, the left-arm spinner sent back Kohli (9) after Litton pulled off an incredible catch at cover after diving full length to his right, leaving Kohli stunned and the crowd at The Shere Bangla National Stadium elated.

At 49 for three in the 11th over, India needed a partnership. KL Rahul joined Shreyas Iyer (24) in the middle but the latter was dismissed by Ebadot Hossain (4/47), who was rewarded for bowling to a plan that works best against Iyer — short-pitched stuff.

With the short 43-run stand coming to an end, Washington Sundar (19) walked in and looked to help Rahul in building a partnership. However, the duo could add no more than 60 runs as, shortly after Rahul reached his half-century, Washington picked a fielder while trying to play the reverse sweep against Shakib.

In the next over, Ebadot sent back Shahbaz Ahmed and Shakib then dismissed Shardul Thakur and Deepak Chahar to leave India tottering at 156 for eight.