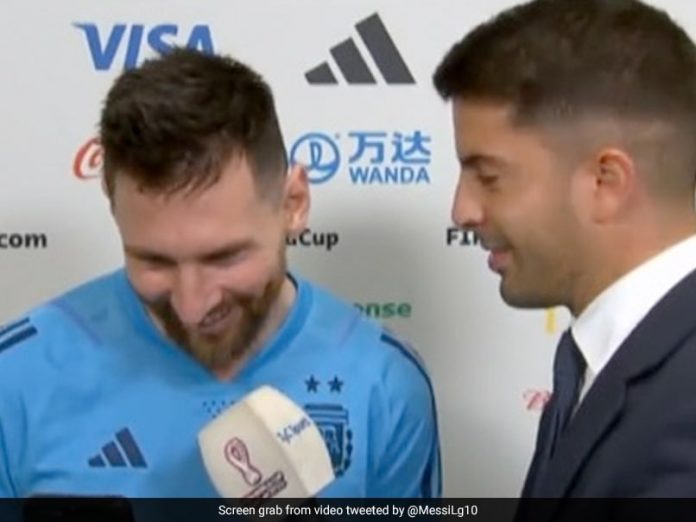 Lionel Messi reacts after watching a video of his wife and kids celebrating his goal vs Australia.© Twitter

Lionel Messi produced a moment of trademark quality to score the opener in a 2-1 win over Australia and help send Argentina into the quarter-finals of the World Cup on Saturday. Messi’s 789th goal in his 1,000th career appearance — but first in the knockout rounds of the World Cup — helped set up a last-eight clash with the unbeaten Netherlands on Friday. Julian Alvarez scored the other in the 57th minute after some calamitous Australian defending, before Enzo Fernandez’s 77th-minute deflected own goal set up an unexpectedly nervy finale.

After the game, a TV presenter showed Messi a video of his wife Antonela Roccuzzo and children (Thiago, Mateo and Ciro) celebrating his first-half goal. His reaction was priceless.

Argentina’s players celebrated wildly in front of their massed ranks of fans and man-of-the-match Messi paid tribute to them for dragging the team across the line.

“Amazing feelings and I am really happy to share these beautiful and happy moments with them all,” said the 35-year-old, who is trying to win the World Cup for the first time in what will surely be his last attempt.

“I know the effort they are making to be here with us and I know how much they enjoyed it.

“There is a bond we have — it is something beautiful, it is what the national team should be.”

FIFA World Cup 2022: This Is How Japan Fans Celebrated Win Over Spain