Korean YouTuber saved by these two youths from molesters on the streets of Mumbai, everyone is praising 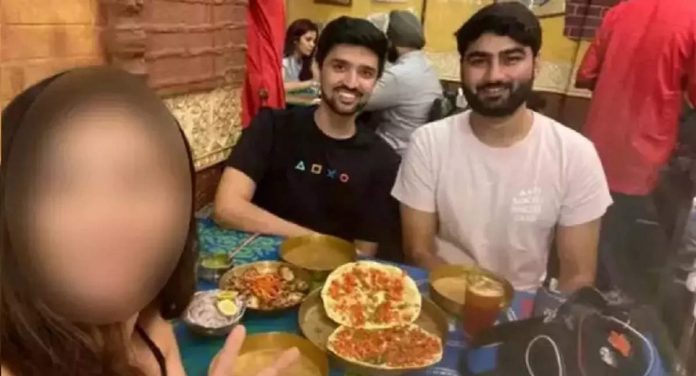 Mumbai: A Korean YouTuber who was molested on the streets of Mumbai has shared a picture. In this picture, the girl is accompanied by two young men, one of whom saved her from the molesters, while the other helped her post the video. The young men are Aditya and Atharva, with whom the Korean girl posted a lunch time picture and praised them. It is worth mentioning that, in this matter, the Mumbai police have arrested two youths, who were molesting a Korean YouTuber.

The girl tweeted the picture and wrote, ‘Lunch with two Indian gentlemen who helped post the video and save me in the street. Aditya and Atharva.’ In fact, another video is going viral after the incident with a Korean YouTuber. The young man saw the Korean YouTuber’s live streaming and reached there for help. After that, the Korean YouTuber thanked him and said, Mumbai is safe.

Korean YouTubers praised the fast-paced action
The young man who saved the Korean YouTuber from the molesters is Atharva Tikka. Talking to the media on Thursday, the woman said, ‘I don’t want this one bad incident to ruin my entire journey and my passion to show other countries the wonderful India.’ The girl said that she has faced this kind of incident in other countries too. However, he praised the quick action of the police in the matter.

Speaking to the media on Thursday, the Korean vlogger said, ‘This has happened to me in other countries too, but there I couldn’t do anything other than calling the police. Actions are being taken very quickly in India. I have been in Mumbai for the last three weeks and am planning to stay here for more days.’

What is the whole matter?
A video of a young man allegedly molesting a female YouTuber in a street in Mumbai went viral on Wednesday. A Twitter account that shared the video claimed that the victim is a citizen of South Korea and was ‘livestreaming’ in the Khar area when the incident took place around 8 pm.

It is seen in the video that the young man came very close to the girl and tried to kiss her twice. He then started holding her hand and trying to pull her despite her protest. As the woman started to leave, the man reappeared on the scooter with one of his friends and offered the girl a lift, but the girl declined his offer.

In this matter, the police have arrested 19-year-old Mobin Chand Mohammad Sheikh and 20-year-old Nakeeb Sadriyalam Ansari. After the video went viral, the Khar police registered a case under section 354 of the IPC and arrested both of them.