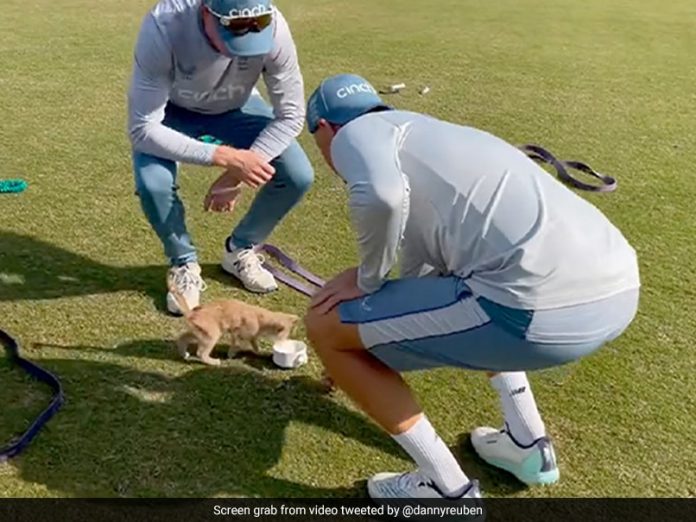 The first Test between England and Pakistan, that starts from Thursday in Rawalpindi, grabbed the headlines a day before the start of the game as around half of the touring side’s players, including captain Ben Stokes, were struck down by an unspecified virus a day earlier match. The Pakistan cricket board said on Wednesday that it was discussing next steps with the England and Wales Cricket Board. In the midst of this, there was a special visitor in England’s training session in Rawalpindi. It was a kitten and former England captain Joe Root brought a cup of milk for it.

Always thinking of others. @root66 feeding one of the Pindi Cricket Ground’s kittens this morning at practice. pic.twitter.com/zoDyE4sK9f

England and Wales Cricket Board (ECB) announced on Thursday that the decision on the commencement of the first Test between England and Pakistan will not be delayed and both boards have agreed to start the match as per schedule from Thursday after the outbreak of viral infection in Three Lions’ camp. England indicated that they’re in a position to field a playing XI in Rawalpindi against Pakistan in the opening Test.

“The ECB has informed the PCB that they are in a position to field an XI, and, as such, the first Test will commence as per schedule today (Thursday, 1 December) at the Rawalpindi Cricket Stadium,” ECB said in a tweet. .

England skipper Ben Stokes won the toss and opted to bat first against Pakistan in the first Test.

(With AFP and ANI inputs)

Share
Facebook
Twitter
Pinterest
WhatsApp
Telegram
Previous articleWho is Hakeem Jeffries? Who was elected the Democratic leader of the US House of Representatives
Next articleDictator Kim Jong Un’s second daughter came in front of the world for the first time! North Korea came under tension