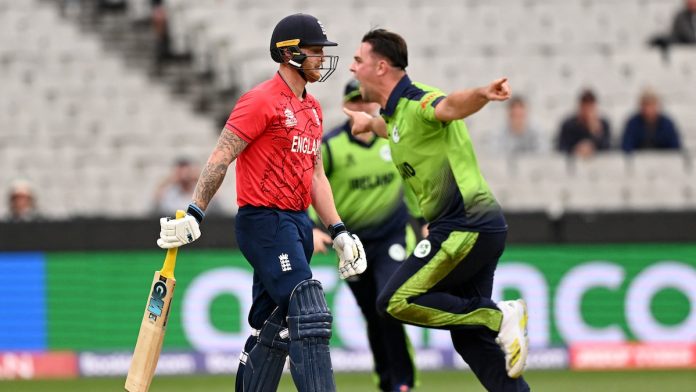 England had an unfortunate day at the T20 World Cup on Wednesday as they were stunned by Ireland by five runs (DLS method) at the Melbourne Cricket Ground. Chasing 158, England lost quick wickets early on but Moeen Ali and Liam Livingstone anchored the innings before the rain played a spoilsport. Play could not resume as Ireland went home with a memorable win. Apart from the win, another thing which caught everyone’s attention was Ireland pacer Fionn Hand’s delivery to dismiss Ben Stokes.

In first ball of the fifth over, England were two down with 28 runs on the board as Ben Stokes, who was batting on 6, was facing Fionn. Fionn’s delivery zipped through the gap between the bat and pad of Stokes and hit the stumps. Stokes, who was trying to play a defensive shot, was left completely bamboozled by this delivery of Fionn.

Coming to the match, chasing 158, England were 105 for 5 in 14.3 overs when the heavens opened up again in the Super 12 match, which witnessed a delayed start due to wet outfield followed by rain. According to the Duckworth-Lewis method, England were found to be five runs short when the umpires decided to call off the game.

David Malan made 35, while Moeen Ali was unbeaten on 24. For Ireland, Josh Little (2/16) picked up two wickets. Earlier, Ireland were bowled out for 157.

Asked to bat, skipper Andy Balbirnie top-scored for with a 47-ball 62 while Lorcan Tucker made 34. Liam Livingstone (3/17) and Mark Wood (3/34) shared six wickets between them for England.