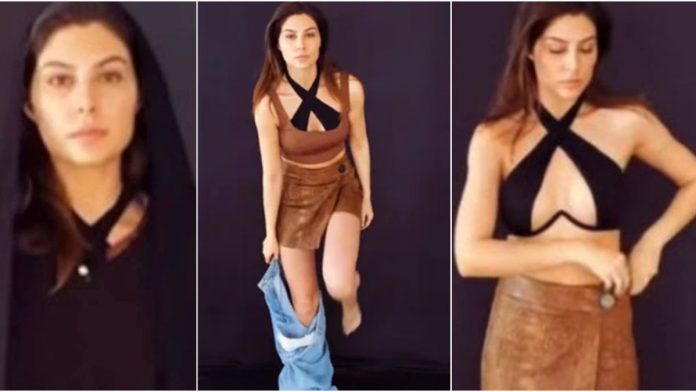 Iran Protest Against Hijab: The ongoing protests in Iran regarding the hijab are on their peak. Photos and videos related to this are becoming very viral on social media. One special thing is that not only women are leading these demonstrations, but they are also taking part in it. Apart from this, men have also taken to the streets to support women. Celebrities around the world are also giving their support to these demonstrations. Iranian actress Elnaaz Norouzi also joined the campaign. Raising her voice against the hijab, she took off her clothes and also shared the video on social media.

The actress tried to convey the message with her video that whoever has a body, will also have a choice as to what to wear. The actress has lodged a protest in a unique way, after which her method of protest has become a topic of discussion on social media. On Tuesday, Elnaaz Nooruzzi posted a video on her Instagram account, in which she is seen taking off her clothes while registering a protest. In the video, the Iranian actress can be seen taking off her hijab and burqa.

Protests are not stopping in Iran

Government forces on Tuesday stepped up their operations in the country’s Kurdish regions to quell protests against the death of a 22-year-old girl in Iran. Acting in the name of morality, the police had caught the girl Mehsa Amini and she died in custody. Anti-riot police opened fire in Sanandaj, the capital of Iran’s Kurdistan province. At the same time, Amnesty International and the US National Security Adviser have condemned Iran for targeting people protesting against the death of Mahsa Amini.

Meanwhile, some people working in oil companies also protested at two major refinery complexes on Monday. Iran’s government has consistently claimed that Amini was not abused, while her family says her body was marked with bruises and beatings. Amini was detained for not wearing the hijab properly. Demonstrations began in Iran after Amini’s death. In some videos that surfaced from the protest, women protesters can be seen being beaten and pushed by security forces. These include women who took off their hijab. Wearing the hijab is mandatory in Iran.

Videos from the capital Tehran and elsewhere continue to circulate online, despite authorities blocking the Internet. A video on Monday showed university and high school students protesting and raising slogans. Some women and girls were seen marching on the streets without covering their heads.

Iran has presented the biggest challenge against Iran’s theocracy through these demonstrations since the ‘Green Movement’ of 2009. The New York-based Center for Human Rights shared a video in which security force personnel are seen circling on motorcycles in Sanandaj. “They also allegedly broke the windows of several vehicles in Bahran,” the center said.

Amnesty International has also condemned Iranian security forces’ use of firearms and even indiscriminate firing of tear gas at homes. US President Joe Biden’s national security adviser Jake Sullivan also condemned the actions of Iranian forces and said, “What is happening in Iran is being watched by the world.” At the same time, Iran has not yet commented on the renewed action in Sanandaz. However, Iran’s foreign ministry summoned the UK ambassador after Britain imposed sanctions on some people from its country over police action. Iran’s foreign ministry called the sanctions “arbitrary and baseless” and threatened to take action against Britain in response.

Russia Ukraine War Update: The ongoing war between Russia and Ukraine is not taking the name of ending. ...
Read more
International

Five-time world champions Brazil have already qualified for the Round of 16 at the FIFA World Cup with a game to spare in the...
Read more
Load more