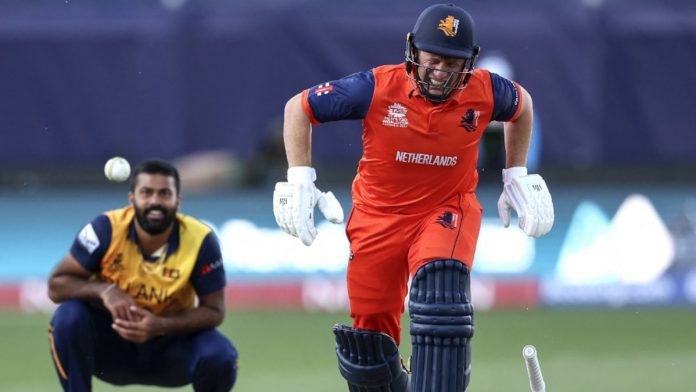 Sri Lanka defeated Netherlands by 16 runs in their final Group A match on Thursday. It was a crucial game for both the sides, hence it saw the players of both the teams giving their all on the field to get a result in their team’s favour. However, the commitment of Netherlands’ all-rounder Roelof van der Merwe stood above all. The player suffered with back pain in the first innings of the game yet came out to bat in the second innings for his side.

Chasing 163, Netherlands lost their ninth wicket at a score of 123 and this is when van der Merwe, who was in the dugout with injury, came out to bat at the number 11 position to make sure his team remained in the hunt. Van der Merwe struggled while running between the wickets but he stayed there till the end.

The result of the match did not come in favor of Netherlands, but van der Merwe won everyone’s heart for sure.

The ICC shared a video of the player struggling between the wickets and lauded him for his commitment.

“Incredible show of determination by Roelof van der Merwe,” wrote ICC with a clapping emoji while posting the video.

“Great effort,” wrote a fan, while the other one said: “Country comes first #respect.”

With the win, Sri Lanka became the first team from Group A to enter the Super 12s of T20 World Cup, while Netherlands also advanced to the main event later, thanks to UAE’s win over Namibia in the last match of Group A.