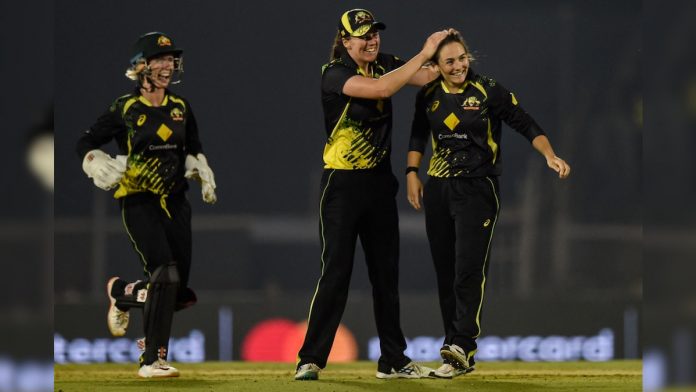 Heather Graham became only the second woman cricketer from her country to take a T20 hat-trick as Australia crushed India by 54 runs in the final match to clinch the five-game series 4-1 on Tuesday. Graham (4/8 from 2 overs) was the star performer with the ball for Australia as she first dismissed Devika Vaidya and Radha Yadav in the last two deliveries of the 13th over. She then returned in the final over of the innings to not only claim a hat-trick with the opening ball in the form of Renuka Singh but also picked up the prized scalp of Deepti Sharma (53 off 34) in the final delivery.

Australian pacer Megan Schutt was the first woman from her country to claim a hat-trick in T20 cricket in 2018.

Sent into bat, Asheigh Gardner (66 not out off 32) and Grace Harris (64 not out off 35) struck explosive unbeaten half-centuries to power Australia to an imposing 196 for four.

The Indian bowlers cut a sorry figure after initial success as Gardner and Harris stitched an attacking unbeaten 129 off just 62 balls to fire Australia to their highest total of the series.

The asking rate was too tall for India as they kept losing wickets at regular intervals to be bowled out for 142.

India started their big chase with a bang with vice-captain Smriti Mandhana (4) pulling Darcie Brown across the square-leg boundary in the first delivery of the innings.

But Mandhana’s stay was short-lived as two balls later she holed out to Grace Harris at forward square leg, looking to flick the ball.

One-down Harleen Deol came all out attacking and struck a boundary through point and gully from her first ball of the innings.

Shafali Verma (13) then got a reprieve in the third over when she was dropped by Harris at point after the batter miscued a shot.

But it was not Shafali’s day as she was caught by Annabel Sutherland off the bowling of Gardner at long-on.

Harleen Deol played a 16-ball 24-run cameo before becoming a victim of an unnecessary run out.

Things turned bad to worse when skipper Harmanpreet Kaur departed. Introduced into the attack in the ninth over, Annabel Sutherland struck gold with her first delivery, trapping Harmanpreet infront of wicket as the batter failed to gauge the length of the delivery.

Wicketkeeper-batsman Richa Ghosh struck two boundaries before perishing and then Heather Graham dismissed Devika Vaidya and Radha Yadav in consecutive deliveries to be in the fray for a hat-trick, which she completed in the final over of the match.

Earlier, Gardner remained unbeaten on 66 off 32 balls with the help of 11 boundaries and one six, while Harris made 64 not out of 35 balls during which she struck six fours and four hits over the fence.

Thereafter, skipper Tahila McGrath (26 off 26) and Ellyse Perry (18 off 14) shared 38 runs for the third wicket to stabilize the innings.

Just when the partnership was looking dangerous, Shafali Verma fooled McGrath with a tossed up delivery which spun just enough to beat the bat of an aggressive McGrath to be stumped by Richa Ghosh.

An over later, Perry departed in search of a big shot down the ground, caught by Harleen Deol in a juggling act off the bowling of Devika Vaidya.

Thereafter, it was a complete Harris and Gardner show as the two batters took the Indian bowlers to the cleaners.

All the Indian bowlers looked clueless in front of the two Australian batters as they found the boundaries at will.

It was Harris who brought up her fifty first in just 28 balls with a six off Renuka Singh in the 18th over and then a ball later Gardner also reached the feat with a boundary in just 25 balls.

It was raining boundaries and sixes towards the end as the Indian bowlers looked completely out of sorts and some sloppy work in the field also didn’t help the hosts.

Vaidya turned out to be the most economical for India with figures of 1/26 from his three overs.