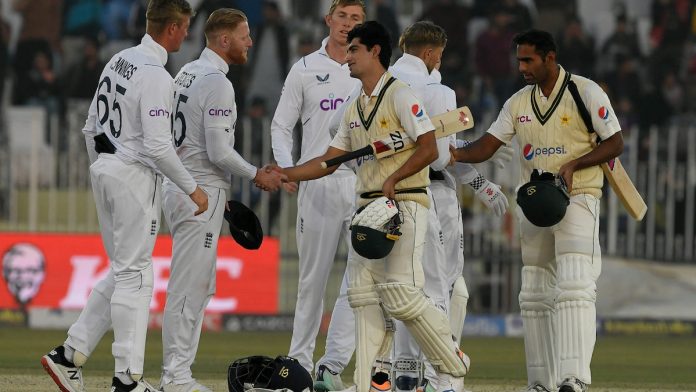 England defeated Pakistan in the first Test on Monday.© AFP

England defeated Pakistan by 74 runs in a thrilling first Test of the three-match series at Rawalpindi Cricket Stadium on Monday. Guest skipper Ben Stokes won the toss and opted to bat first. England scored 657 runs in their first innings that included a world record of 500 or more runs in the first day of a Test match. Meanwhile, Pakistan put up a good total of 579 in response. In their next innings, England skipper Stokes made a bold move to declare at 264 for 7, setting a 343-run target for Pakistan before his side bundled out the chasing team for 268.

The win sees England receive a lot of praise for their approach in the game, which for a point in time seemed to end in a draw or go in favor of Pakistan.

Lashing out at the losing side, former Pakistan spinner Danish Kaneria said harsh words for the national team. He added that the management, captain and PCB chief would now say that they didn’t have Shaheen Afridi for the game and that played a major role in the loss. While saying this, Kaneria also questioned if other players in the team are there to sell pickles.