Demonstration in Paris against Pakistan, a large number of Indians celebrated Black Day 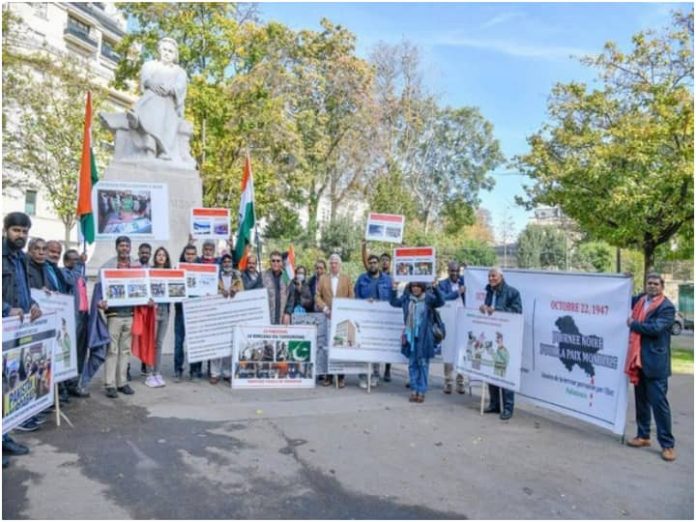 Anti-Pakistan Protest In Paris: People of Indian origin protest outside Pakistan’s embassy in France on Saturday (October 22). The protest was organized to mark the 75th year of Pakistan’s invasion of Kashmir in 1947. The protests were led by elected representatives of Indian origin from the local governments of cities near the Paris area, as well as members of various Indian expatriates.

Among the elected representatives who spoke on the occasion were Selva Annamalle, City Councilor of Montmagney and Freddie Pater, City Councilor of Aragonese. Both called on Pakistan to stop exporting terror to Kashmir. Similarly, the protesters condemned Pakistan for its continued policy of disturbing peace in Kashmir and spreading Islamic fundamentalism in the region.

The protesters also displayed posters on the time of Pakistan’s invasion of Kashmir and its attempts to hinder development activities in the Kashmir region. The speakers highlighted the rapid development activities undertaken in the Union Territories of Jammu and Kashmir and Ladakh. Flags of India and France were hoisted and the national anthems of both the countries were sung.

October 22 is celebrated as a ‘Black Day’ in the history of Jammu and Kashmir. On 22 October 1947, Operation Gulmarg was launched to capture Kashmir under the command of Major General Akbar Khan. Besides General Akbar Khan, among others who planned and executed Operation Gulmarg was Shaukat Hayat Khan, a close aide of Muhammad Ali Jinnah, the founder of Pakistan. The state machinery chose 22 October 1947 as the date of the attack. Shaukat Khan, in his book ‘The Nation that lost its soul’, admitted that he had been appointed as the observer of the Kashmir operation.