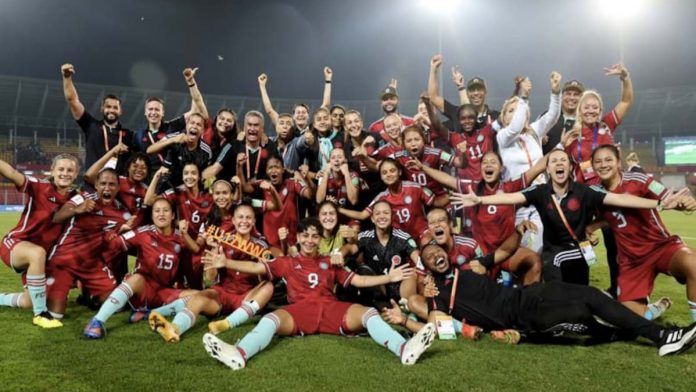 The Colombian team after its win over Nigeria© Twitter

Defending champions Spain beat Germany by a solitary goal in a closely-fought semifinal Margao on Wednesday to set up a summit clash against Colombia in the FIFA Women’s Under-17 World Cup. Lucia Corrales scored the lone goal of the match in the 90th minute at the Nehru Stadium here. The final will be played at the DY Patil Stadium in Navi Mumbai on Sunday.

Spain thus avenged their loss to the same opponents in the European qualifying tournament on penalty shootout in May. Spain had beaten Mexico 2-1 in the 2018 edition final. They had finished runners-up to Japan in 2014 and third in 2010 and 2016.

In the first semifinals played at the same venue earlier in the day, Colombia beat Nigeria 6-5 via a dramatic penalty shootout to become the first South American country to make it to the final of the age-group showpiece.

The two sides were locked goal-less at the end of the regulation time.

It was heartbreak for Nigeria as they were on the verge of victory in the shootout.

At 4-4, Edafe could have handed her side the win as hers was the last shot among the first five players, but she hit the post to continue the shootout.

Share
Facebook
Twitter
Pinterest
WhatsApp
Telegram
Previous articleVacancy is out for the posts of IT Professionals in NTRO, know how to apply
Next articlePreparing to respond to Ukraine’s ‘Dirty Bomb’! Russia’s exercise in water, land and sky, see picture