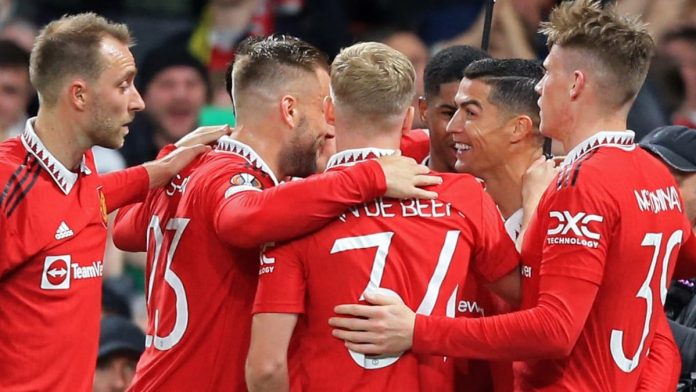 Cristiano Ronaldo scored on his first Manchester United appearance since his refusal to come on as a substitute last week in a 3-0 win over Sheriff Tiraspol in the Europa League on Thursday. The victory, with goals from Diogo Dalot and Marcus Rashford adding to Ronaldo’s strike, guaranteed the Red Devils a place in the next round, where they will join Barcelona who were knocked out of the Champions League at the group stage 24 hours earlier. United manager Erik ten Hag left the Portugal forward out of the United squad for Saturday’s draw at Chelsea and he was only allowed to return to first team training this week.

“He created, the team created for him and we know he has the capability to finish.

“He needed a goal and now I’m confident there will be more goals,” he added.

Right-back Dalot opened the scoring just before the break before Rashford doubled the lead with 25 minutes to play.

Ronaldo claimed his 701st club career goal and made sure of the three points with nine minutes left.

Arsenal, who have already reached the last 16, lost for the first time in the group stage as they went down to a 2-0 defeat at PSV Eindhoven.

Gunners coach Mikel Arteta said afterwards that defender Pablo Mari, on loan at Italian club Monza, was having medical treatment after being stabbed in a Milan shopping center in an attack which killed one person and injured three others.

“He is in hospital. He seems to be OK. I will get a briefing now about what happened.”

Surprise early season Bundesliga leaders Union Berlin kept alive their hopes of a place in the knockout round of the second-tier European competition thanks to a 1-0 win over Braga.

In the Conference League, West Ham maintained their 100 percent record by beating Silkeborg 1-0 and Fiorentina clinched their spot in the last 16 with a 2-1 win over Istanbul Basaksehir.

In their first match since coach Unai Emery announced he was leaving to manage Premier League club Aston Villa, Villarreal dropped points for the first time in Europe this season.

Despite having already qualified for the last 16 as group winners they were held 2-2 by Hapoel Beer-Sheva as Sagiv Jehezkel equalized in the 79th minute.

In Group D, Cologne’s trip to Slovacko has been postponed to 1100GMT on Friday after the game had been originally delayed by half an hour due to heavy fog in the Czech Republic.

The teams managed just seven minutes of play before the referee abandoned the fixture with the score goal-less.