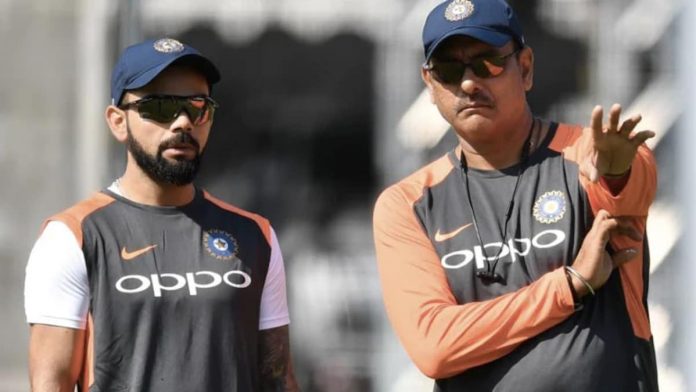 2022 has been a roller coaster ride for Virat Kohli. The year started off on a bad note for the batter as he struggled with form in the Indian Premier League (IPL) and then the multi-format series against England. However, come the Asia Cup, Kohli was at his best, having rested for the T20I series against West Indies and then the ODI series against Zimbabwe. The world saw the absolute best of Kohli in the T20 World Cup match against Pakistan as the batter played an unbeaten knock of 82 runs off just 53 balls to help India chase down 160.

With 28 needed off 8 balls, Virat possibly produced the shot of the tournament as he smashed a slower ball bowled by Haris Rauf for a six straight down the ground. On the next delivery as well, Kohli hit a maximum.

Former Team India head coach Ravi Shastri has said that those shots played by Virat are the best ever played by any Indian batter.

“In all my years of playing and watching India vs Pakistan, those two sixes off Haris Rauf are two of the greatest shots played by an Indian batsman. The only comparison is Sachin Tendulkar’s six off Shoaib Akhtar in Centurion in 2003 World Cup. These are two of the greatest cricketers of our time. Tendulkar’s knock had some of the magnificent shots played in white-ball cricket against Wasim Akram, Waqar Younis, Shoaib Akhtar. And then this Kohli knock. These two are the biggest knocks I have seen where quality fast bowling has been taken apart,” Shastri told the Indian Express,

Further talking about that knock, Shastri said: “Perhaps, it’s best to start with a feeling that I didn’t have when I was watching the greatest T20 knock by Virat: I wasn’t surprised. I was waiting for this to happen. I knew this would happen in Australia. Just check his record here – the pitches suit him plus he loves playing on these grounds and in front of the fans here. His record against Pakistan has always been good and it was a big situation: cometh the hour, cometh the stage, cometh the man.”

“I got emotional when it was all unfolding. I have seen what he has gone through in the last couple of years. We all know the recent context. Did I have something to say to him at the end? Frankly, not a thing. We are a country with short memories; topi masters of the world! We flip, change in two minutes. Kohli knows what I feel. I know what he feels. What’s there to be said? Not a thing,” he stated further.

Lastly, speaking about the former India captain, Shastri concluded by saying: “For the cricketing world, he was a superstar even before the knock; now let them decide what he is to them. I am not going to put in words for them. What’s next for Virat Kohli? I have no expectations, just let him enjoy his life. The media and critics have put enough pressure on this uncut diamond and he showed who he is. Chup kar diya na sabko?! (He has silenced everyone, right),” said Shastri.

Share
Facebook
Twitter
Pinterest
WhatsApp
Telegram
Previous articleSolar eclipse will be visible from Europe to India, it will be dark in Russia, know how to see amazing astronomical event
Next articleRupee falls to 82.73 per dollar, China’s yuan falls to a new low