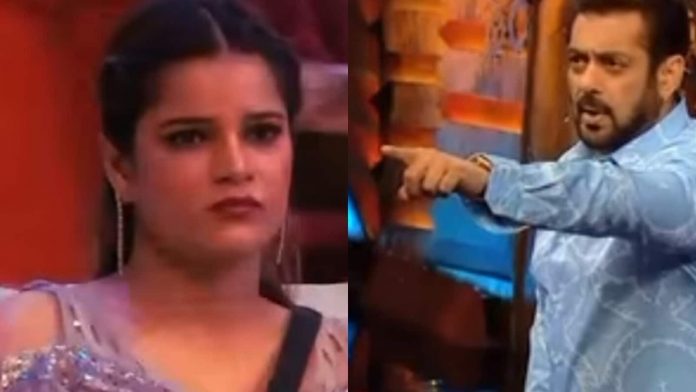 Salman Khan will take charge in the upcoming weekend episode of Bigg Boss 16 and will take on contestants MC Stand and Archana Gautam, who were recently engaged in a heated argument. Recently, Archana told MC Stand that she survived in Bigg Boss because of the begging of the audience and called her a servant of Bigg Boss. In response to that, MC Steyn told him, “Tere baap ka servant hai kya (Am I your father’s servant)?” And also commented on his mother. Colors TV released a new promo from Saturday’s special show Shaniwar Ka Vaar, where Salman is coming down heavily on the two for their behaviour. Read also: Bigg Boss 16: Archana Gautam calls MC Stan ‘lousy’

After MC Stan, Salman goes to Archana. He tells her, “Archana aapne kaha na khairaat mein aaya hai. If someone has come in this house as alms, then it is Archana. She refuses to change her statement and replies, “Sir, main sahi hoon (I am right).” Salman lost his calm and replied, “Agar ye aapka attitude hai toh abhi ke abhi door kholta hoon, jaiye aap.”

For quite some time, the audience has been criticizing the show for being biased towards Archana. Now it looks like Salman will finally take his class in the upcoming episode.

Reacting to the new promo, a user wrote in the comment section, “Archana ko Niklo.” “Quitting is a word #mcstan totally right,” added another. Someone else commented, “There is no doubt that Archana is rude…but what Stan said to Archana ko woh bhat was more wrong.”

Bigg Boss 16 airs from Monday to Friday at 10 pm. It airs on Colors TV on Saturdays and Sundays at 9 pm. The program is hosted by actor Salman Khan, who appeared on the reality show in its fourth season.