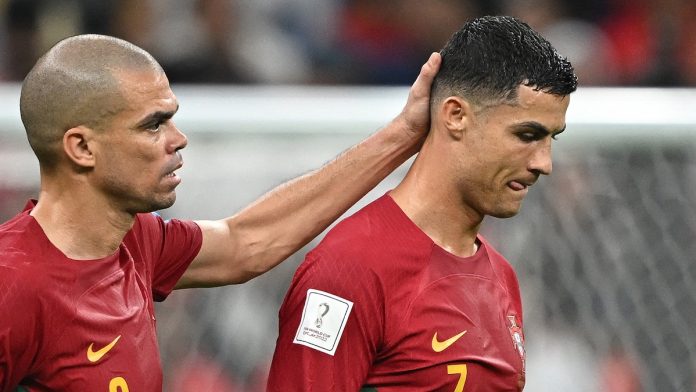 With Portugal into the FIFA World Cup knockout game against Switzerland, manager Fernando Santos made the big call of dropping Cristiano Ronaldo to the bench. Seeing Ronaldo not in the starting XI, fans and football pundits went berserk on social media, wondering what transpired between the Portugal captain and his manager. Not long after the development former Manchester United defender Gary Neville urged Ronaldo that his ‘sulking’ has ‘got to stop’.

Neville has been quite critical of Ronald of late, especially after the 5-time Ballon d’Or-winner started to show an indifferent attitude towards his Manchester United manager Erik Ten Hag.

In a chat on ITV, Neville has once again taken a stance against Ronaldo, suggesting his managers at Juventus and Manchester United might have been ‘wrong’ but is the Portugal manager also ‘wrong’ in having decided to bench him?

“Well what happened at United, the suggestion was, it was because [Erik] Ten Hag was trying to make a move on him, he’s trying to establish his authority. This is a manager [Santos] who’s got an unbelievable relationship with Cristiano Ronaldo for eight years.

“And there are a lot of fans of Cristiano Ronaldo who aren’t willing to tell him the truth. I think he does need to listen to the truth, that it’s becoming a little bit of a scruffy end,” he said.

Neville, who has played alongside Ronaldo for a brief period at Manchester United, urged the Portuguese to protect his ‘short-term legacy’ and stop stomping and sulking around so much.

“It wouldn’t surprise me if he came on tonight and scored the winner, but the petulance, the stomping around, the sulking it’s got to stop because it doesn’t reflect well on him at all.

“His long term legacy is set, he’s protected. He’s one of the great all time players but in the short term, he’s got to do a lot better, because is the Juventus manager wrong? The Manchester United manager wrong? And now is the Portugal manager wrong? There’s three of them that now have done the same thing with him,” Neville had said before the start of the match.

As for the Portugal vs Switzerland match, Ronaldo’s side secured a comfortable victory to march into the quarter-finals.