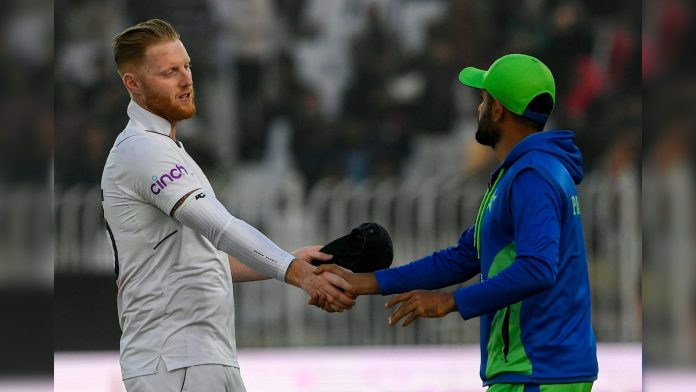 At the risk of losing the first Test, England produced a dramatic performance on Day 5 of the Rawalpindi encounter to secure a historic victory on Monday. With the ‘Bazzball’ in full swing, England score 657 runs in the first innings before bundling out Pakistan for 579. Ben Stokes & Co. then declared their innings on 264/7 with the hopes of bowling out Pakistan. Though the move was a risky one, England did bundle out Pakistan for 268 to wrap up the victory by 74 runs.

England’s victory over Pakistan has truly set a new precedent, making the entire world see Test cricket in a new manner altogether. The victory didn’t just instill England’s faith in their approach towards the oldest format of the game but also saw fans flood social media with memes.

This pitch produced a result only cos Eng made 650 in 100 overs and declared potentially risking a loss. Well played England, well led @benstokes38 @englandcricket #PAKvENG pic.twitter.com/pWbAH7vhWh

Pakistan lost a match needing 340 off 100 overs on a road pic.twitter.com/EfDMVPirrA

England captain Ben Stokes even termed the team’s victory over Pakistan as one of the nation’s greatest away test wins in history. At the post-match presentation ceremony, Stokes said that he had ‘no interest’ in trying to play for a draw.

,Some of the things we can’t plan for is what happened to the squad before the Test. Seems a long time ago when we were running around to find players for the Test. Will Jacks getting the message three minutes before toss, and Pope getting the gloves. We’ve played 8-9 matches with myself and Brendon in charge. One thing we try to do is focus on ourselves and not the opposition. We know we’re a very exciting team. Was a great batting surface, so it was an opportunity for our batting group. Having the lads truck in like they did today was amazing. Really special group of players. We wanted to come here to Pakistan and carry on with our mantra of exciting cricket.

“I’ve got no interest in trying to play for a draw, the dressing room has no interest in playing for a draw. Felt on this kind of wicket, almost had to entice the batsmen to play an attacking shot. Today we were fortunate to get the ball reverse-swinging. James Anderson and Ollie Robinson were fantastic today. We won probably about 8 minutes before we would’ve come off. This is probably up there as one of England’s greatest away wins,”said the England Test captain.

Considering the nature of results England have produced in Test cricket recently, it’s safe to say that the ‘Bazzball’ is here to stay.