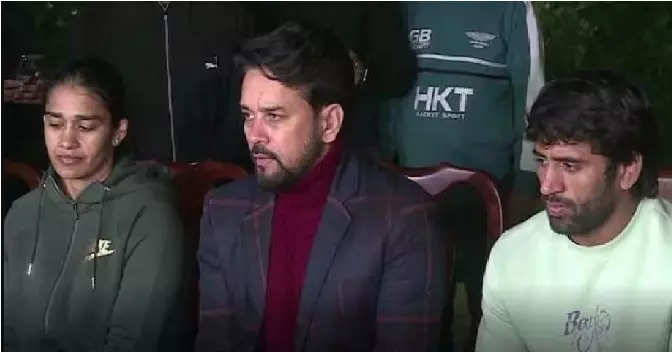 Amidst the ongoing agitation and controversy in the country’s capital Delhi for the past few days, officials of the wrestling association are on target. Then the Sports Ministry has acted on the allegations leveled by the wrestlers. Sports Ministry has suspended Wrestling Federation of India Assistant Secretary Vinod Tomar. This is the same secretary who gave the statement in favor of Brijbhushan Sharan Singh.

Secretary Brijbhushan was taking the side of Sharan Singh
Vinod Tomar himself said this evening that Brijbhushan Sharan Singh is still on the post of Chairman. But will keep himself away from any official work till the investigation continues. He will state his position in the general body meeting tomorrow and the subject will also be discussed among the representatives across the country. However, let us tell you that Vinod Tomar was appointed as Assistant Secretary by the Wrestling Federation of India (WFI) on 29 October 2002. The Ministry took note of the reports on the functioning of WFI including the role of Vinod Tomar. In these reports, the Ministry found that Vinod Tomar’s presence would be detrimental to discipline. In view of which the Sports Ministry has decided to immediately suspend Assistant Secretary Vinod Tomar as per the provisions of the Sports Code 2011 (Annexure-IX).

These arguments have been given on allegations of sexual harassment
In the information that the WFI has given to the government regarding the allegations of sexual harassment, it has also given some arguments and said that a sexual harassment committee is active in the federation. If this is the case, why has it never been complained about? Further stated that the name of Sakshi Malik is one of the members of the committee. He is one of the main faces of the protests. The WFI has also claimed that the protest is being led and wrestlers from a particular state (Haryana) are joining it. Moreover the protest is motivated by vested interests, as the WFI elections are due later this year.