71 war between India and Pakistan, the defeat of Yahya Khan’s army or political failure? Let’s know the truth of Bajwa’s claim 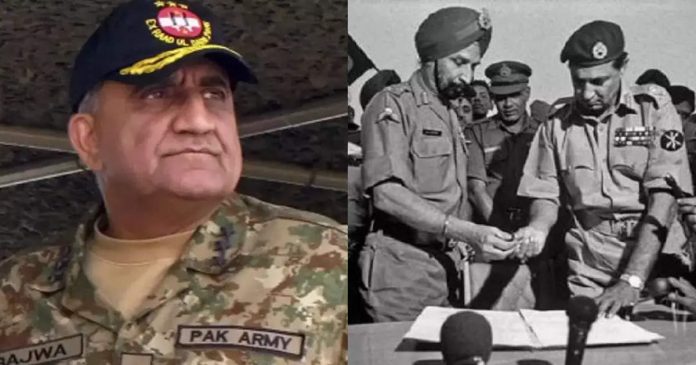 Islamabad : These days the post of army chief is in discussion in Pakistan. There are two reasons for this, first – the search for a new army chief and second – the departure of the old army chief, who is currently surrounded by controversies. One reason for the controversies is also the report which opens the raw sheet of increase in the wealth of his family. A controversy has also started regarding the 1971 war which was mentioned by the present Army Chief General Qamar Javed Bajwa in his last speech before retirement. He termed Pakistan Army’s humiliating defeat in the 1971 war as a ‘political failure’ rather than a ‘military failure’. This statement has raised a big question whose answer we will try to find today.

Bajwa said that not 92 thousand but only 34 thousand soldiers took part in this war from Pakistan’s side. They were up against 2.5 lakh Indian soldiers and 2 lakh Muktivahini soldiers who were given special training. Bajwa said, ‘Our army fought bravely but their martyrdom has not been honored till date.’ Many reports have already exposed the atrocities of Pakistani soldiers in Bangladesh, but here the question is different. The big question is whether the defeat suffered by the Pakistan Army in the 1971 war was really a political defeat or did the Pakistani rulers of that time make a big mistake in deciding the war? Let’s know…

Imran is restless with the new army chief Munir, but even after looting, Bajwa bombam! understand what is the matter
How true is Bajwa’s claim?
Pakistani journalist Rafe Klasra questioned Bajwa’s remarks in a video, saying, ‘Before the war in the 1960s, the power of the country was not in the hands of any politician, the power was in the hands of General Ayub Khan and martial law was in force in Pakistan. Was engaged After 10 years, he did not hand over the power to any politician, he made General Yahya Khan sit on the chair. Classra said, ‘No political party had decided to start the war in East Pakistan. People like General Yahya Khan were taking these decisions at that time. From 1958 to 1971, first Ayub Khan and then Yahya Khan, all the decisions were his. How can you say it was a political failure?’

‘Why fought the war with a small army’
He said, ‘If you knew that there was a large number of Indian Army and Muktivahini army in front, then you should not have fought the war at all. Whose decision was it to fight the war with only 34 thousand soldiers, which was wrong? A solution should have been found by sitting with the local population and Sheikh Mujib, on the contrary, he was accused of treason and sentenced to death, imprisoned in Pakistani jails.

Bajwa wanted to create a good image
Classra said that calling it a political failure, it cannot be blamed on the responsible politicians. The fault should also be of General Ayub Khan and Yahya Khan as they were taking the decisions. He claimed that by the time of retirement, Bajwa wanted to build a good image in the army by terming the 1971 war as a political defeat. The war between India and Pakistan started on 3 December 1971 and ended on 16 December 1971 with the surrender of the Pakistani army. In the 13-day war, the Indian Army liberated East Pakistan from the atrocities of the Pakistani Army and an independent country, Bangladesh, came into existence.

General Zia’s disciple Aseem Munir is like a ‘guru’ among Pakistani soldiers, will he put thorns in India’s path?
Who took the decision of war?
Be aware that when this war started, there was martial law in Pakistan and the power was in the hands of General Yahya Khan. Military rule had come in Pakistan in 1958 itself with the imposition of martial law and General Ayub Khan was in power. This process lasted till 20 December 1971 when Zulfikar Ali Bhutto became the new President of Pakistan after winning the election and abolished martial law.